Wearing an Obama shirt to the Republican Caucus 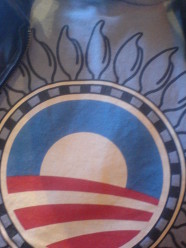 It’s caucus day, part 2! After caucusing for Barack at the Kansas Democratic caucus last week, I thought that I’d see how they did things on the other side of the aisle. So, I rustled myself out of bed at 9AM (who holds a caucus at 9AM?!) this morning and drove five minutes to my former high school where the Republican caucus was going to be held.

Much to my surprise, the line was stretched out the door and around the entire school, equivalent to the Democratic caucus. But, considering that my county probably has a 2-1 Republican to Democrat ratio, perhaps it wasn’t that big of a surprise. Throw in the sunny, beautiful weather versus the icestorm on Tuesday night, and it’s less of a surprise. What also surprised me was the whiteness of the crowd. Kansas isn’t too diverse, but this was ridiculous. Out of perhaps a thousand people, I only saw three other non-white people, an African American couple in the auditorium, and another African American who was a volunteer with the party. And then there’s me, who wasn’t even voting.

Did I mention I was wearing my Barack Obama t-shirt?

I asked a lone sheriff,the only official in the line, where the observor check in was. He told me to go into the main entrance (the crowd was being filtered into a side entrance). I walked in, and an old lady, without making me sign in or anything, let me through the barrier into the auditorium where the caucus was being held. Maybe I can vote, I though, then realized that I had no ballet.

One thing I’ll give the Republicans – their caucus system is far more Democratic, much better organized, and more orderly than ours. It’s a straw poll, and the system here was, once the auditorium was full, they closed the doors, let the speakers make their pitches, then had everyone fill in their ballets. Then they’d empty the auditorium, let a new crowd in, and repeat the process. Far better than the clusterfuck at my Democratic process, where no one had any clue how to deal with the huge crowds. After a short speech from the caucus chair, and the state party chair (the indominable Kris Kobach for those of you familiar with Johnson County politics). “If there’s one thing we can agree on, its that there will be no President Clinton or Obama this fall” he said, and I beamed that Republicans were actually mentioning Barack! We all stood to do the pledge of allegiance to prove our patriotism, and then each of the four speakers choosen by the Presidential candidates came up to speak. That’s right, four.

Next up, to my surprise, Kathy Kriss, a supporter of, get this, ALAN KEYES. She tried to one up Huckabee – “Keyes is the most pro-life, most pro-fun, most pro-sovereignty” before taking some hits at John McCain and throwing out a lot of red meat. “If we send a moderate against a liberal, we will lose. Alan Keyes will beat the Democrat.” Just like he beat Barack Obama in Illinois?

After all the conservative red meat, I felt bad for the next speaker, Pat Politan, a McCain supporter. So I was suprised when she got her applause line, and she immediately moved into McCain talk. “We know John McCain. A Vietnam hero, honorable, who served his country.” The room broke into spontaneous cheer – lest anyone question their patriotism!

There was one more speaker, an elderly white male. So imagine my shock when the party chair introduced…Barry Goldwater?!

Barry Goldwater the third, actually, on behalf of Ron Paul and about a third the participants at the caucus. And by far the best speaker of the night, persuasive, succinct, and funny. He said the only line I could agree with the entire evening.

“You know, when I hear McCain and Romney going back and forth in the debates, it reminds me of meaning of the work politics. Poly, meaning many…and tics.”