Policitizing the Olympics in China 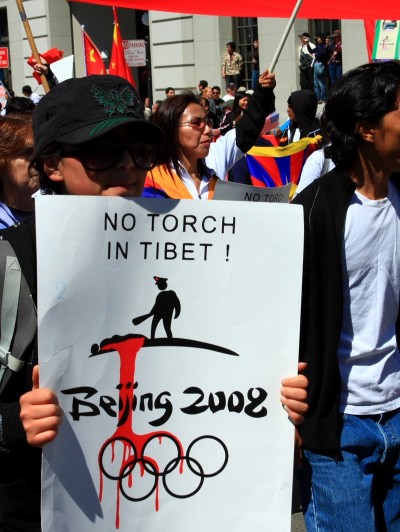 There is an allure to the Olympics games, and allure that transcends sport. It is the ultimate gathering of the world – because of the athletes who participate, amateurs from all different walks of life competing peacefully and representing their countries with valor that makes us all proud.

But the Olympics are far more than who wins the gold. From the Olympic charter.

Olympism is a philosophy of life, exalting and combining in a balanced whole the qualities of body, will and mind. Blending sport with culture and education, Olympism seeks to create a way of life based on the joy found in effort, the educational value of good example and respect for universal fundamental ethical principles.

Mimicking an idea from another Olympic games (see more below), China is organizing a worldwide tour of the torch as part of their grand public relations bonanza surrounding the games, and has invited 50 world leaders, including President George W. Bush to attend the opening ceremonies.

If there is one thing that history has taught us, is that we cannot divorce the Olympic Games from Politics. It is fitting that the torch made its only North American stop in San Francisco, the birthplace of the United Nations, and on my way to the Torch rally I passed through UN Plaza, where representatives from 50 nations, including China (the nationalists, not the communists) hoped to wipe away the ashes of war and lay the foundation for a humane, just world.

The Olympics have always been, and always will be political. pleasedontbefake wrote a diary about the 1968 Olympics, and how the international attention placed on the dictators in Mexico paved the path for eventual fair, free Democracy. In away, the Olympics helped bring about this change in Mexcio and the diarist believes that 2008 in Beijing will be similar. I fear, though, that another Olympics might be a better analogy. One where a similar torch rally was held to improve a nation’s deteriorating standing in Europe.

Hitler was convinced by Joseph Goebbels to allow the games to take place in Germany. Preparation for the games started in the early 1930s. Hitler used the Olympics as a tool for propaganda. Film-maker Leni Riefenstahl, a favorite of Hitler, was commissioned by the International Olympic Committee to film the Games. The film, titled Olympia, originated many of the techniques now commonplace to the filming of sports.

Hitler removed signs stating “Jews not wanted” and similar slogans from the main tourist attractions. Hitler desired to clean up Berlin, the German Ministry of Interior authorized the chief of Berlin Police to arrest all gypsies and keep them in a special camp.[1] Nazi officials ordered that foreign visitors should not be subjected to the criminal strictures of anti-homosexual laws.

Politicizing the Olympics. Hiding repression. Throw in a military buildup and growing economic might, and you have Berlin/Beijing 2008, the sequel, with the Chinese Community Party in the starring role.

Beijing is mimicking Nazi Olympic preparations. In 2001, the communists promised the international community to improve human rights in order to win the Olympics but once the games were awarded Chinese officials changed their tune. Deputy Prime Minister Li Langing said his country would maintain its “healthy life” by combating the Falun Gong spiritual movement and Vice President Hu Jintao promised “… to fight … the separatist forces orchestrated by the Dalai Lama [the spiritual leader of Tibet].”

We didn’t boycott the 1936 Olympics. We did almost nothing to reign in Nazi Germany until it was almost too late. The international spotlight of the Olympics only enhanced Germany’s global standing and help move the country rapidly into a war economy. We all know the costs.

Would a boycott have made a difference? Would the international community paying attention to the already evident signs of gross Human Rights Abuses in Germany helped? We will never know.

But, in retrospect, wouldn’t it have been worth it to try? Is there anyone who doesn’t wish that the world had done more to stop Hitler before it was too late? It is now 49 years since China illegally invaded and annexed Tibet – 49 years where the international community has done little for the Tibetan people, or the numerous other oppressed peoples of China. Southern Mongolia, East Turkestan – who speaks for them? Were it not for the sea, Taiwan, one of the few multiparty Democracies in East Asia, would also be under the reign of the CCP. As the cultural genocide continues, the world prepares to gather in the nation with more executions than every other country combined, with horrendous Human Rights atrocities, and rumors of mobile execution vans abound. Is that Olympism?

If we don’t do something now, if we don’t use this leverage to force reforms within China, when will we get the next chance?

I will end with a quote from an unlikely source, yet one that I agree with.

“Bush’s presence would be akin to President Franklin D. Roosevelt sitting in the same stands as Germany’s Adolf Hitler in 1936….any American seen waving in the stands “will go down in history as cooperating in the genocide Olympics of 2008. And history will never, ever, ever forgive them.”