Beautiful from Below – Montreal 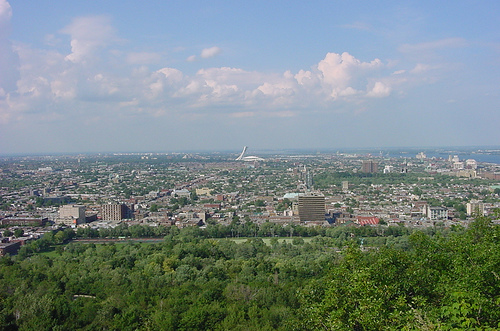 View US Roadtrip 2010 in a larger map

We were walking up to the mountain in the center of Montreal, from which the city gets it’s name, through the dense forests of bare, winter trees, with a spattering of pine providing glimpses of green. Like almost everywhere I’ve been since starting my travels in January, Montreal, like Utrecht, Berlin, Paris, Munich, Chicago, and Montpellier, is supposed to be much nicer in the summer.

Montreal, my friends Simon and Chantal, who I’d met in Granada, Spain, told me, is amazing in the summer.

At the top of Mont-Royal, we could see a vista of the city. Though the vista was beautiful, it wasn’t spectacular. From here, Montreal looked like any other typical North American city.

My girlfriend, Young, said it best, “It’s must more beautiful from below.”

From below, looking up from the street, Montreal was eclectic. With few buildings taller than 2 or 3 stories, the winding, outdoor staircases on every building, the red brick atmosphere, and pervasive street art, and some of the best breweries I’d ever been to anywhere in the world, Montreal was spectacular not in it’s grand edifices, but in it’s details. To enjoy Montreal, you had to see what was in-between the lines.

Rare that I find a city I think I could live in. But Montreal…perhaps. Perhaps.