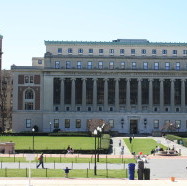 The next step in my life path has been set. I’ll be joining the halls of privilege, ivy lined with prestige, at Columbia University this fall. Here is an account of my journey.

I can’t remember the first time that I heard about Columbia. Probably, it was back in elementary school, when they told us about the greatest Universities in the world, the Ivy Leagues. But New York City was nothing but a ghostly enigma to me, a city I’d never seen, didn’t have any interest in seeing. My life was pointed decidedly westward, towards my birthplace, my destiny firmed in California.

It wasn’t until graduation, and not until I’d visited many of the great cities of Europe before I, along with many of my friends from California, set foot in New York. Cold, a big suffocating, and drab, the city left me eager to learn more. I returned two years later, after traveling around the world, with a new goal in mind.

I remember stepping into the large, grey concrete edifice that is the School of International Public Affairs, SIPA, taking the slow elevator up to the conference room. I immediately felt inadequate. The person in front of me was a graduate of Oxford, and had worked in Africa for many years. To my right, a Harvard graduate who’d had several articles published.

And me? A guy who graduated with an unrelated degree (communication) and who’d just spend 13 months traveling.

You know the rest of the story (if not, click on these tags – San Francisco, Barack Obama, 2008, and Iowa). Two years later, with a much stronger resume, and more focus, I reapplied, got accepted, and this fall, I’m eager, if nervous, to start the next adventure in my life.

Life works in strange ways. I departed, after quitting my job, to Europe for five weeks, mostly to decompress from two years of office work. I’d quit my job without knowing if I’d gotten into any of the three schools that I had applied for, nor with any other plan if graduate school failed. I had about five thousand dollars that slowly began to get burned by the exchange rate in Europe (not as fast as expected, though, thanks Greece!)

I ignored those thoughts and tried, successfully, to have fun. Then I flew home, exhausted. The next morning, I woke up. Checked my email while my parents drank coffee.

So I’m moving to New York this fall. I couldn’t have imagined this five years ago. But it does mean the end of my California dream. For my entire life, California was the beacon of hope, and for the past nine years since I graduated from College, it was essentially, my home. Though I left often, whether to study abroad, travel, or return to Kansas for a summer, it was my base. Now, I am truly saying goodbye as life leads me in other directions.

Bon Voyage, California. You’ll always be in my heart, but, I don’t think I’ll be back.