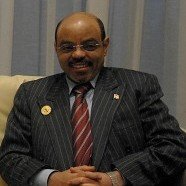 The announcement that Prime Minister Meles Zenawi, leader of Ethiopia for 19 years, would speak at Columbia University’s World Leaders Forum created a stir from within the Columbia student body, sparking a debate whether Zenawi has done an adequate job balancing economic development with civil rights and freedom.

Journalists sent an open letter to Columbia President Lee C. Bollinger, asking for an explanation for the University hosting a controversial world leader, and if a venue for counter-voices would be provided. The University responded that all World Affairs Forum speakers are held to identical standards of openness and questioning, regardless of their nationality or stature.

However, it appears that Zenawi has as many supporters as he does detractors. When Zenawi spoke at the forum on September 22, there were two competing demonstrations, one in support of Zenawi and one against, across the street from Alfred Lerner Hall.

My first article for the Columbia SIPA publication Communique.

“I believe that he has a right to speak here,” said Semir Saleh, an undergraduate student at NYU who participated in the demonstration against Zenawi. “But people also have a right to know about what his regime is doing.”

Zenawi took power of Ethiopia in a 1991 coup and was reelected in parliamentary elections in 2005, amidst accusations of voting irregularities and intimidation, which led to widespread protests and police retaliation that killed 193 people.

The most recent elections were held this summer, with Zenawi’s coalition winning 99.7% of the seats in Parliament. According to those present, it was a quieter, more repressive environment.

“People were fearful. You have to think about how your decision effects your family, your community, your friends, and your employers,” said a second-year SIPA student with experience working in Ethiopia who preferred to remain anonymous. While no major violence was reported, Human Rights Watch criticized the government for preventing foreign news organizations access to report on the elections..

Despite accusations of repression, many credit Zenawi for Ethiopia’s economic achievement. Ethiopia boasts one of the fastest economic growth rates in Africa, at over 10% a year for the past five years, according to official reports from the Ethiopian government. However, the International Monetary Fund questions this number. Zenawi’s supporters cite the reported measurement as evidence of progress, considering it an indication of Ethiopia’s emergence from a repressive military dictatorship and famine that left over a million dead.

“I’d be surprised, considering our [economic] record, if we didn’t win overwhelmingly,” said Zenawi, speaking of the 2010 elections at the World Leaders Forum.

Zenawi considered his leadership more benign compared to the previous regime. “It’s not coming back,” he said of Ethiopia’s military ruled era.

While supporters praise Mr. Zenawi for reigning over a period of relative prosperity and tranquility, others believe that diminishing freedoms outweigh the benefits of stability.

“It’s a common attitude in Africa to accept something because it’s not as bad as it was before,” said the anonymous student. “[The military regime] was terrible, years of famine, people disappearing, and worse.”

Whether Ethiopia’s stability is improving however is still up for debate. In May, Human Rights Watch issued a report, criticizing an Ethiopian law passed in 2009 that aims to paralyze civil rights, education, and conflict resolution advocacy groups by requiring that 90% of their funding come from within Ethiopia. This is a challenge in a country which, despite its proclaimed economic growth, has one of the lowest per capita GDP’s in Africa.

“When I asked the Ethiopians I met if they would rather have democracy or economic development, they always said democracy,” said another second-year SIPA student with experience working in Ethiopia who preferred to remain anonymous.

The debate continues both in Ethiopia and abroad. Articles both criticizing and praising Zenawi’s speech to Columbia University have sprung up on blogs and websites around the world. Both proponents and critics of the Ethiopian leader voice hope that greater awareness and communication will lead to progress in the future.