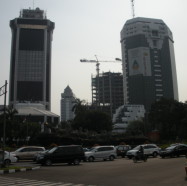 Construction beckons Indonesia’s modern capital, Jakarta’s, entry as a 21st century economy – the drive from the airport into the central city is dominated by high-rise shopping and office complexes. Indonesia wants to be the second I in “BRIIC,” and is using its natural riches to become one of Asia’s newest engines of growth. It is those very natural resources that are driving economic growth both within Indonesia and in Asia; Indonesian coal powers many of China’s new power plants, and its minerals make possible Asia’s expanding tech sector. Mining alone still accounts for almost 13% of GDP, and many economists believe that a rise in commodity prices is most responsible for Indonesia’s recent growth. With shopping malls and strong consumer spending, Indonesia looks, on the surface, ready to take its place at the global economic table.

It makes sense – strong consumer spending is a sign of a developed economy. In the United States, in one of former President George W. Bush’s first statements after 9/11, he told Americans to “keep shopping,” in order to avoid a potential post-attack recession. Consumer spending forms the vast majority of the US economy. In Indonesia, it now accounts for nearly half, and a far higher portion within cities. The western model of consumer driven economic growth has been exported to Asia, and along with it, the idea that economic growth trumps other determinants of social well-being. This is not just an Indonesian phenomenon. There are now nine shopping malls in East and Southeast Asia larger than the Mall of America in Minnesota, with malls in China and the Philippines leading the way.

Though malls are being built in Indonesia, other infrastructure is not. The World Bank’s logistic performance index ranked Indonesia 75th globally – below Honduras, the Dominican Republic, and Benin, all countries with lower per-capita GDP. Jakarta still lacks an effective public transit system, its port is overcrowded and inefficient, and things become worse in outlying islands. The commodity driven boom is driving consumerism, but not infrastructure, education, or health, and this has potentially devastating long-term consequences for the sustainability of Indonesia’s economy.

Raw materials were the driving force behind Dutch colonial exploitation – then, the products in demand were rubber, coffee, indigo, pepper, sugar, and tea, grown on the fertile soil of Java. These riches went to very few, and the country as a whole became poor. After independence in 1945, many thought that the country would quickly grow, and that its resources would provide a strong base for future prosperity.

Some growth did occur, but with it came civil war, population growth, cronyism, and a repressive dictatorship. Educated Indonesians lament that “we were once a colony of the Dutch – now we are a colony of America and Japan.” The Dutch profiteering has been replaced by that of foreign corporations like Freeport McMoran, Chevron, or Japanese Timber conglomerates. Some Indonesians are gaining, but Jakarta’s shopping malls, far away from the open-pit mines of Papua or the deforestation of Kalimantan, are a sign of failed priorities. A resource-driven boom should be, in theory, the most equitable, because a country’s natural wealth is supposed to be for all of its citizens.  Yet the majority of Indonesians, especially outside of Jakarta, remain only marginally better off today than before the resource boom. Indonesia ranks 105th in the United Nations Human Development Index, again far behind several countries with similar per-capita GDP.

There is little green space in Jakarta; instead, air-conditioned taxis whisk people through traffic to the new social spaces in modern Indonesia; giant shopping mall. It is western consumerism taken to its logical conclusion – shopping as the symbol of growth. But Indonesia still has a long way to go to fulfill the promise of its natural wealth to all of its citizens. If consumerism is the sole determinant of economic growth, then Indonesia is more than ready to be a global economic power, but sustainable, long-term equitable growth may be just as much of a dream today as it was after independence. The future of all of East Asia may be foreshadowed in Jakarta – only time will tell what will happen once resources begin to be depleted or global prices fall.