Losing the Voyage in our Shrinking World – The Nile 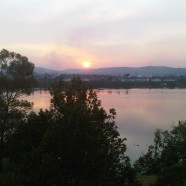 “Such a long journey,” I often heard after telling friends how long our flights from New York City to Kampala, Uganda were – almost 16 hours by plane.

“It is,” I always responded, but, lately, with a wince. I’d just finished reading “Heart of Darkness,” by Joseph Conrad, about his narrator, Marlow, and his long journey up the Congo river to meet Kurtz, a representation of the depravity of colonialism. That journey took Marlow several weeks from England into Belgian Congo, a treacherous voyage, one that Kurtz himself did not survive. Compared to that journey, what was 16 hours?

I was also headed to Africa, like Marlow, not to the Congo, but near another much sought after spot that cost many lives. The source of the world’s longest river, the Nile. Many Europeans spent years on jungle treks, often at loss, seeking this spot which, today, was only a two hours public taxi ride from Kampala. Total travel time from New York – 18 hours.

The epicness of where I am, a place which was the driving force of so many dreams, adventures, and legends, seems utterly lost. The image of sailors, after weeks of hard journey, coming upon Lake Victoria, the second largest freshwater lake in the world, where today, the cafe I’m sitting at plays American rock music, the television shows CNN, and everyone accepts American dollars. This evening, I’m expecting a phone call from my parents, their voices clear on my Ugandan cell phone, the distance between us cut down to nearly nothing. The majesty is lost, the magic, fading.

As I look at the pointed necks of the kingfisher birds diving into the surprisingly clear, crystal water, the gentle flow upwards towards South Sudan pushing longboat fisherman northward, I imagine another dream.

To sail all the way up the Nile, on a small boat, to see the amazing contrasts in landscapes and cultures. Tropical Uganda, the temperate Sahel, the Sahara and then the fertile Nile Valley. How grand it would be, to start here, and end in Alexandria and enter the Mediterranean above the same water that flowed out of this great lake.

And how impossible it would be.

The idyllic picture of the Nike view you see above is a human creation. Three months ago, the gently flowing river below was a raging waterfall, one that had flowed for thousands of years, crafting the rocks through the slow change of time. No longer – a new damn has shut off the falls, all in the name of electricity for development in a country that lacks adequate power. Along the Nile are numerous dams, which make my dream sail impossible.

Even if I could traverse all the borders, and get across all the damns, I still might not be able to make it to Alexandria. The increasing demands by rapidly growing populations through industry and agriculture are taking its tolls on the rivers flow. Often, the Nile fails to make it all the way to the ocean, instead, drying up miles before Alexandria.

In one way, yes, it is easy for me to come here, and see the source of the Nile. But at the same time, the modern world makes its impossible for me to understand what being here really means. The Nile I see before me today is only a facsimile of the grand Nile of the Pharaohs and the many kingdoms of Africa, a river that during its long, epic journey, flows across half of a continent, the birthplace of the human species.

In three days I’ll head back home, another 16 hour journey that distorts how far Africa really is from New York. I will try my best to grasp the distance that I have traveled. Somehow, I hope to understand my place, standing here, looking onto the Nile for the first time in my life, and the generations that have come before me, and most importantly, those that will come after me.

What will they see here? How will they relate to my experience here?