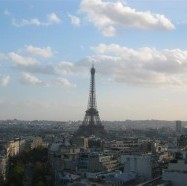 When I was 19, I prepared for my first big trip abroad, to study abroad in France. For me, it was the chance to finally see the world. I’d traveled abroad before – a few times, in fact, but mostly to the same place, India. Europe, then, was a great unknown. I didn’t know a single person on the entire continent.

My mindset at the time was a more raw, un-refined version of my mindset today. When choosing places to study abroad – my options limited as a Sophomore  – I quickly discarded all the English speaking countries. No Australia, no UK, no Canada, no Ireland, no New Zealand. Even then, at a basic level, those countries didn’t interest me for one sole reason – language. If I could be understood, could understand what was around me, it didn’t really feel like traveling. It didn’t feel like a challenge.

I was aware, then, of what I’ve now come to realize is my greatest fear. And language was its most basic construct. So I choose to go to France, over Italy and Spain, because neither of those offered me the option of living in a large city. For weeks before my departure, I was excited, attempting to learn French, looking up my street on Google Street View, reading about Europe in my AAA travel guide. I craved anything that proved how different France was from America. The difference, that was why I was traveling.

But at night, while asleep, my fears came to the surface. One dream I vividly recall was of me going to a radio station in Paris. There, I was greeted by a tall, French lady who spoke to me in flawless English, with a mild French accent. I can’t remember why I was there, only that I was disappointed that her English was so good – it made my attempts to learn French seem futile, pointless.

I sat to relax, and soon, one of her colleagues entered, also French, and they quickly gave each other cheek kisses, and said “bonjour.” But after that quick greeting, they quickly began to speak English too. I was terrified. French, it turned out, was being displaced by English even here in France. France was actually turning into America. Homogeneity.

Dreams of that sort repeated themselves until I got to France and learned that French people still spoke French, though my deeper fear, that I could survive just fine with only English, proved to be prescient. In fact, it’s proven itself prescient almost everywhere in the world. Something of traveling – being forced to adapt to a different language, culture, way of living, as been lost.

Why, people ask, is this such a bad thing? The ability to communicate using a single language should be seen as a boon to ideals of world peace.  Don’t languages just divide us? And, as any traveler can attest, there are still vast cultural different around the world, and that appearances can be deceiving.  Uganda, my most recent international destination, took the cake as the most English friendly country, but at the same time, had a distinct, even flourishing, oral tribal culture unlike anything I’d ever encountered. So is my fear justified? Can’t universalism and heterogeneity co-exist?

The problem is how we value culture in our society, and the assumption that diversity naturally leads to conflict – a point with which I vehemently disagree.

In this world, minor differences become accentuated. In the south they say “y’all,” while in Canada they say “eh?” and that connotes regional difference, notwithstanding the fact that, just four or five centuries ago, there were completely different language, cultural practices, and spiritual beliefs in both places. That is forgotten and replaced by something far more artificial. Homogeneity is not human.

My biggest fear was starting me right in my face. It wasn’t that France would turn American. It was America – the Americas, the continent, not just my country – that represent everything that has gone wrong in the world.

English and French completely displaced all the native languages of the United States and Canada. Spanish and Portuguese have done nearly the same to the languages of Latin America. No place on the world has so much diversity been lost – and no place on the world do people seem to have so little awareness of this fact. Can anyone in New York City, one of the most culturally aware cities in America, name the first nation that used to live on the island of Manhattan just 300 short years ago?

That I can speak English in Los Angeles, and also in New York – that is my greatest fear. That what happened here will happen everywhere. That we haven’t learned from history’s greatest mistake. Hidden within all the rhetoric about modernity is the idea that, at some level, it’s a good thing that so much diversity has been destroyed here, and that its this model of forced homogeneity with emphasized symbolic differences that we are exporting abroad.

That one day, when I travel, to find what I’m seeking with require me to dig deeper and deeper, until I can no longer see what it is I want anymore.

I still dream. Of a world that values culture, diversity, as being equal, where consumerism is not longer the organizing principle of society. It’s still there. Paris opened my mind back in 2002. During my trip around the world in 2006-2007, I saw that the world had much to teach me. The problem is that us – here, in the developed world – are not really listening. We can continue to dance Tango, go to Yoga studios, eat “ethnic” foods, and consider ourselves worldly, blind to the fact that our actions are creating the world that we will live in. A world where small differences seem great, but the overall human experience is growing more and more dull.

Because besides our diversity, what else do we really have as a species?