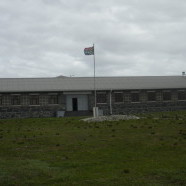 I recently made a pledge – to not visit Tibet until the Dalai Lama, and his followers, Tibetan refugees all around the world – are free to visit Tibet. Despite my love and interest in Tibet and its culture, it was, in my heart, an easy pledge to make. To go to Tibet just because of my own status as an American citizen, while those born there, or descendants of refugees, cannot, feels empty. I only want to visit a Free Tibet, and if that never happens in my lifetime, so be it.

Freedom is not just a state of being, it is an action, and in my mind, a collective action. Today, I visited Robben Island, where Nelson Mandela, Mac Maharaj, and numerous others were imprisoned for several years for nothing more than their beliefs. As the very beginning, the tour guide thanked us for our dedication to freedom, and reminded that if it were not for the actions of the international community, Robben Island would still be a prison today, and that she would not be a tourguide. I cringed upon hearing this, having seen at the Apartheid Museum that my country, the United States, was one of the last in the world to withdraw support from the Apartheid regime, long after other countries of conscience had done so.

I read Mandela’s book, Long Walk to Freedom, last summer while in Indonesia. The fact that the world allowed a man like Mandela to be jailed for so long is incredible, but what was even more incredible was Mandela’s ability to forgive his tormentors and demonstrate reconciliation. I saw this firsthand as we met with one of Mandela’s former wardens, who still works at Robben Island, and today, is friends with Mandela, when he told us about his experiences on the island. Many religions, including Buddhism and Christianity, preach the power of forgiveness. Here, I saw it firsthand as it touched my heart.

Robben Island is incredibly serene, with never-ending sounds of the ocean crashing against the rocky store, seagulls, and the salty, ocean breeze. In silence, I imagined life here, and wondered. Do I have the power, the convictions, to survive here for 18 years, to have the patience to treat my tormentors with respect because every human being has good in their heart?

South Africa’s wealth – diamonds, gold, and other minerals – and the demand for those minerals around the world are part of the reason that Apartheid lasted for so long. The value of gold was, sadly, more important than the value of human rights. If I look around the world today, though, sadly little has changed. Even South Africa, a a country that you would think would stand up for human rights everywhere, isn’t immune. Recently, the country denied the Dalai Lama a visa to visit, despite the protests of Nobel Laurete Archbishop Desmond Tutu, bending to economic pressure from China, the same type of economic pressure that kept many countries, including my own, on the sidelines during Apartheid.

As Martin Luther King boldly stated, “Injustice anywhere is a threat to justice everywhere.” As I left Robben Island, I wondered when we would finally began to practice the ideals that humanity is more important than wealth, and truly value life for what it is.