Afrikaners and the “American” Dream 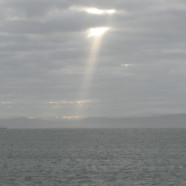 Afrikaners (including the Boer subgroup) are a Germanic ethnic group in Southern Africa descended from Dutch (including Flemish), French and German settlers whose native tongue isAfrikaans: a Germanic language which derives primarily from 17th century Dutch, and a variety of other languages. Mainly Christian, Afrikaners developed in much the same way as the New England colonies in North America. The original South African Boer republics were founded on the principles of the Dutch Reformed Church. The murals looked eerily familiar to something I’d seen before.

The landscape, of course, was completely different than anything in America. The covered wagons and pastel colored colonial dresses were not riding through flat, prairie land, but dramatic cliffs overlooking vast, open African dry savannah. This was the Voortrekker monument, commemorating the movement of thousands of Afrikaners people from the Cape to modern-day central and northern South Africa.

The word Afrikaner sounds strange to an American – the word representing both a language and a people that descended from Europe, but find their roots definitively in African soil. We think of African as being black. Afrikaners, though, are white.

As I walk around the grounds, looking at the wall of wagons, one against another forming a circle around the monument, a tribute to the Battle of Blood River, where thousands of native Zulus died fighting the migratory Afrikaners, I feel in the back of my head that I’ve heard this story before. I want to say that it is terrible, horrible, to have a monument that celebrates something that, later, turned into Apartheid and the dividing of the country into 80% “white” land and barely 12% “native” land. But I can’t say it. It sounds, it feels, and then, I realize, it is, hypocritical.

Because of where I come from.

What does it mean to be an Afrikaner? The key to understanding, I realized, lay not in the murals or signboards at the Voortrekker Memorial, but in my own history, my own past, and my own identity as an American.

A migratory people, from overseas, who brought their own language but took on an identity tied to the place they were. Once there, they spread, seeking out their dreams, driven, often, by religion, punctuated by conflict with the local people, barbarians, who have no right to the land and are thus forced elsewhere.

It was the story of the Oregon Trail, a video game that was incredibly popular in my youth, especially in Kansas City. The movement of white “Americans” westward into what they saw as empty land, but was in reality land occupied by numerous indigenous peoples, was and still is celebrated just as the great trek was, and to some extent still is, celebrated in South Africa.

“Indians” were forced into reservations in the most inhospitable territory – the dry Southwest, or arid, red soiled Oklahoma, while the best land went to white settlers. The story is nearly identical in South Africa, where homelands were designated for black Africans,while the vast majority of the land went to white farmers, especially where water and other resources, were plentiful.

History, of course, was different in both places. In America, we had Andrew Jackson, who ignored Indian treaties and pushed American expansion westwards, forcing natives into inhospitable lands and resulting in the extermination of numerous peoples and cultures. South Africa got Nelson Mandela, who pushed reconciliation and equality. The homelands are gone, there are now 11 official languages, and people are free to move wherever they want – if they can afford it.

In America, there are still reservations, where poverty and alcoholism are rampant. Running water is still scarce in many of the dry, arid southwest reservations such as the Navajo or Hopi reservations. But by now, it almost seems like a lost cause. Barely 1% of the population is indigenous, and only few dozen indigenous languages remain today out of what was once hundreds.

The Afrikaner dream, of a country dominated by whites, was another version of the American dream which was realized. And not just in the United States, but all around the Americas, where today, European languages, culture, and religions are the norm.

But while here, in South Africa, there is wide understanding among people of all colors that the dreams of Afrikaner nationalism were a moral blight, that apartheid was evil, and that the creation of homelands was unfair, in America, we have yet to come to terms with our past. We still believe in the American dream, in the greatness of our country, in our preeminence globally. Just listen to the rhetoric being spouted by Mitt Romney.

The Voortrekker monument remains as a testament to a past that should never be forgotten, and the understanding that Afrikaners are part of the peoples of South Africa, equally with all the others. Poverty is still rampant in black townships, and the dream of true equality is still distant.

In America, we instead ignore the poverty and slow, painful destructions of the few remaining indigenous peoples, as their lands continue to be encroached by coal companies and gambling interests. It is easy for us to condemn Afrikaners and Apartheid. But we still have Indian reservations. The treaties remain broken. Indians are treated as subjects, not sovereign nations. Any dreams of equality have been long lost amidst the forgotten atrocities of the past. If there is one thing I’ve learned in South Africa, it is that reconciliation is possible, but first, you have to recognize and understand history, and its consequences. We, Americans, have a long way to go.