A Word Unspoken at Both Conventions: Syria 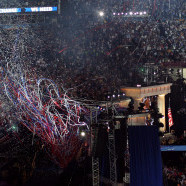 I speak French, therefore, as part of my daily newsfeed, I check not only the progressive blogs and the few decent remnants of the American mainstream media, but also the French language media as well.

The situation there is getting worse.

I was not surprised that Mitt Romney chose to ignore Syria. I mean, he didn’t even mention our troops in Afghanistan, a major faux-pas. He’s running a campaign focused on blaming Obama for the economy that Republicans in Congress have deliberately harmed in order to hurt Obama.

I was disappointed, but not really surprised that Obama didn’t mention it either. It is a complex issue, one without easy solutions, and one that does not lead to easy soundbites. He rarely mentions Libya either, knowing that even though intervention helped there, that peace is fragile.

How, in todays modern world, can such a pressing global issue be so easily ignored in the midst of a Presidential campaign?

Well, its easy. We do it all the time. An estimated 5 million people died in the two Congolese wars, the deadliest wars since World War II. In hindsight, minimal international intervention after the Rwandaan genocide – another foreign disaster that we ignored – could have prevented such widescale conflict from breaking out.

Sri Lanka’s decades long civil war recently came to a bloody end, and though there was ample coverage in the European press, we heard little about it here.

There is a reason that the French news covers Syria more than our news does. France was, for a short time, the ruler of Syria, and many Syrians speak French fluently, and there was, until recently, a regular exchange of people between the two countries. Nevertheless, I often find better coverage of many issues in the French media – the recent coup d’etat in Mali, the civil war in Cote D’ivoire, elections in Nigeria – than I ever here in our media.

I wish that the American media would begin to force both candidates to take a position on the issue. We, the netroots, rose up to address the mainstream media’s shortcomings. This is where we can shine. For President Obama, greater awareness from the public on what is happening in Syria, may help increase public pressure and give him the space to begin to take greater action beyond the small, but significant steps, he has taken. Aid has been increased, but it must be increased more, and there must be a strong, unified strategy to deal with the crisis and enact strong sanctions on the Assad regime.

NATO must play a greater role, seeing as its a neighboring NATO member, Turkey, that is being flooded with refugees.

Sometimes, we as American look too inwardly in our campaigns. I thank those who have written about Syria online. Yes, foreign news played little role in the conventions this year. But the future, in a true, progressive America, I hope that reasoned debate on our role in preventing humanitarian crisis becomes a required point in any Presidential convention speech.