Gun Shootings and the Military Industrial Complex: The Root Problem 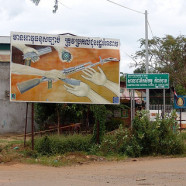 In Cambodia, one of the popular activities for western tourists to engage in is going to a gun range and shooting one of the many leftover weapons from the countries bloody past. Sitting in the guesthouse I listened as a European bragged.

“They even let you shoot a cow with a rocket launcher. It feels fucking amazing,” the tall, rustic white male said.

“How much?” asked someone else.

He had interested several of the others, who began to plan an excursion.

Dwight Eisenhower warned us about the growing power of the military-industrial complex in his final speech, though as President he did little to stem its tide. Despite what is seen as a march to peace, the global arms industry has grown

Here is the problem. If we truly want peace, eventually, that will mean massive reductions in military spending, which will be devastating to companies that are reliant on this spending – Boeing, Lockheed Martin, Northrup Gunman, gun manufacturers who desire markets, and many others. The cities around America depending on Military bases and their spending. These corporations hold massive sway over Government and the Pentagon’s bloated, wasteful budget. We’ve had chances to change this. After the end of the Cold War, President George H. W. Bush had a golden opportunity to pursue a peace dividend, to move military spending towards global social programs and pave the path away from a perpetual war-economy, a state that the United States had been in since the end of World War II.

Instead, Bush choose an alternate path, as we invaded Iraq for murky reasons. It was a war or American technology, more modern technology versus the technology that we’d sold to Iraq over the past few decades.

Now, the War on Terror – a war which will never end – has replaced the Cold War as the raison d’etre for the Military-Industrial complex. The children in Sandy Hook were mere collateral damage of gun shootings, much like the civilians killed by military drone strikes in Pakistan and Afghanistan. This only brought home what is the reality in many places in the world. The violence aided by the ready availability of arms all around the world, the anger created by the use of weapons in unneccesary wars.

No matter how many cows are massacred in Cambodia – in an effort to profit from the weapons sold to Cambodia for profit by arms manufacturers in the west – we are in a system that won’t budge. Weapons are being built, exported, and used far quicker than they are being destroyed. Every technology eventually filters down the lowest level, where it can be used for impunity. The ongoing conflict in the Congo – where do those weapons come from? They certainly aren’t being manufactured locally.

Here, anywhere, Gun control is not the answer. It is a mere band-aid that won’t solve the problem. We need to dismantle the military-industrial complex that has dominated the world for nearly a half century, and eliminate weaponry from the global economic system.

That is the only solution.

My question – how many people must die in Syria, the Congo, Palestine, or Connecticut before we finally tackle the real root problem?