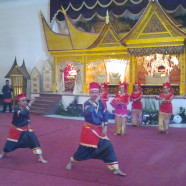 When dreams come true, they no longer seem like dreams. For me to imagine that, when I first took an airplane abroad alone, to Paris, that I had no friends anywhere in Europe or Asia. Now, years later, many, if not most, of my friends are abroad. Which means I’m usually far away from them – not necessarily a good thing

Another early dream involved weddings. It seemed like the ultimate way to show that you’d been accepted into a culture, to take part in one of its most personal expressions. It was an unmet dream, In fact, until Taiwan, despite all my travels and international friends, I’d never been to a wedding abroad. Never!

How four months in Asia has changed things. While networking in Bangkok, I meetup with Aris, who interned with my good friend Jiaming at UNESCO, and she organized a wonderful dinner where I met some other amazing people. At the end, after thanking, she told me that I am invited to her wedding the following week. I was in shock – the kindness was incredible, and it was unbelievable that in America someone who invite someone like this. So, of course, I went, terrified as I knew no one else attending but the wedding couple, knowing that everything would be in Thai.

Luckilly, I recognized someone from the dinner as I entered, and found out I was to sit at the “UNESCO” table, and enjoyed the best food of any of the weddings I attended in Asia. Mmmm! The wedding couple “cuts” the cup-cake at a Thai weddings in Bangkok, 2012

I was traveling through Southern Thailand when I received a surprise email from a Malay friend I’d met six years ago, but who is currently living in New Zealand. He only just found out I was in Southeast Asia.

“Hey, my sister is getting married on Friday, want to come? You can stay in my Grandmas house.”

Whoosh, I hopped on a night train, followed by a mini-bus, then a regular bus to Kuala Lumpur, where, I found, I was the only non-family member staying in the home, the only non-Muslim attending the morning religious ceremony. It was chaotic – cousins, aunts, uncles everywhere, speaking in Malay mixed with English, organizing everything until the very last minute. The evening reception had a crowd of nearly a thousand, coming in and out, eating the delicious buffet lunch. Most Malays can speak English, thankfully, and while my friend was busy attending to his sibling duties, his aunts and uncles took me under their wings and taught me an incredible amount about Malay culture.

I joked, upon arriving to Indonesia to meet my good friend Melody, that the way this trip was going, I’d get invited to a wedding here sooner or later.

Two days later, I was staying with one of her friends, and mentioned that I’d been to three weddings already this trip.

“Oh, my cousin is getting married next week. You should come,” he said.

It was going to be a Padang-style ceremony, a region in Sumatera famous for being the largest Matriarchal society in the world, full with traditional food, dance, and a beautiful Padang style setup. Four weddings in four months. I’ve learned some valuable lessons. The wedding I most enjoyed and most touched my heart was the one in Taiwan, where one of my good friends, whom I’ve known for over nine years, was getting married, and where plans had been put in place for months.

The others were great experiences, but I felt like an observer, not a participant, and having never know the couple getting married, couldn’t feel their love touching me. It was a social gathering, fun, but not heartfelt as I dream of love being.

And, of course, someday, it will be my turn.