A Cancer of the Heart: Bali 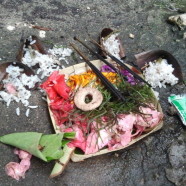 It often seems that at least 90% of foreign tourists only step into one part of Indonesia – Bali, the formally Hindu majority paradise just to the east of Java. But by the time I finally took the ferry across the narrow waterway between the two islands, I’d spent three months in Indonesia, all in Java.

I was truthfully, scared to come here. It features heavily in classical writing about Asia, a tropical paradise, Shangri-la, with an amazing unique culture and perfect artistic light. But something perverse had happened, and Bali was now a weak shell of its former self, flooded with Westerners seeking a completely different version of paradise than the allure that first brought white Europeans to these shores.

That was what I feared, to see something so special in a state of ruin.

Nevertheless, people told me that Bali was still special. “Just avoid Denpasar, or Kuta. Go into the remote valley’s and you’ll still see the villages, untouched.” That Hinduism still flourished on the island, and that the Balinese had a way of maintaining their uniqueness despite modernization. You just had to get out of Denpasar, Kuta, away from the hordes.

Escape from modernity, to the edges, where things were…still the same? The perversity of the statements dogged me, tortured me, as I crossed the ferry from Java into Bali. It is a city of smog, traffic, massage parlors, ubiquitous mini-marks, and five-story clubs with less diversity than most clubs in America. It is also the biggest city in Bali, where the money, the airport, and the business life of the island are. This is the new center of Bali.

The population in Bali is growing fast – meaning that every year, the indigenous people are becoming less and less in numbers. With every year, the Bali of the past is disappearing into history. A culture that lasted for so long cannot survive globalization. Every year, we will have to go deeper, further into the hinterlands, of which there are not many in such a small island, to see “authenticity” or just enjoy the captured versions, organized shows and plays where meaning is divorced from context.

If the heart is sick, then the rest will follow. Everywhere I go in the developing world, the capitals are often despicable places, full of consumerism, poverty, exploitation, traffic, and often worse. Denpasar has a massive sex-tourist industry – did that exist in the time of the Balinese royalty? Yes, you can find genuine forms of culture everywhere, even places like Jakarta, but they are fleeting, being transformed by the forces of homogenization that are turning the world’s culture into shallow shadows of their former selves. You can still see symbols of Hinduism in Bali, on the streets alongside the bars, in alleys. Most people ignore them, seeking something else. Or they notice them, and give them more importance than they deserve.

We need to fix the heart. Denpasar should cater to Balinese, not to other Indonesians, Australians, or Westerners. Bali is an extreme version of our collective human future, one where consumerism rules and culture dies.

It can happen. What makes us human is not what we buy, or how we dress, but who we are, expressed through culture. Once we recognize the value of culture, perhaps we can protect it, and begin to cure the heart of humanity.