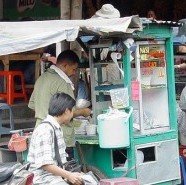 Ubiquitous, cheap, filling, and, most importantly, delicious. Street food and Indonesia are often seen as one and the same. They are outside the shopping malls of Jakarta, providing a cheap alternative to western-priced fare inside for mall staff, tucked into alleys in Denpasar, in specially designated areas in Solo, always within a few minutes walk in any city, amazing for a country where nearly everything requires you to drive.

Street food is to Indonesia as boulangeries are to France. Unlike French bakeries, though, street food is relatively new to Indonesia’s culinary scene, and has been transformed into a national obsession. Its emergence coincides with rising diabetes, blood pressure and other health issues quickly turning into a crisis. Most tellingly, according to the World Health Organization, the adult obesity is now at 21%, one of the highest rates in Asia. The chief culprit? Unhealthy diets of greasy street food and sugary drinks.

To understand the effects of street food in Indonesia, we need to go back to the 1960′s in my own country, the United States, when a transformation altered the way people ate food and, created a health crisis that has, today, reached epic proportions.

Read entire article
This is an exert from a piece I wrote on Asian Street Food culture in Indonesia, published in Jakarta Expat, a print magazine.