Why Burma is Our Future 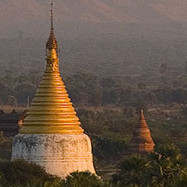 The distant, penetrating booms had never been heard before in mystical Mandalay. They were similar to thunder, yet didn’t seem to come from the sky. In fact, only one person in the royal city, a young Indian waiter-boy, knew what the sounds were. The blasting cannons of modern, British gunboats, coming to make history.

Within weeks, the royal family was in exile, the majestic Palace has been looted, and the face of Burma, the crown jewel of Asia, has changed forever.

This is the vivid intro to my favorite book, Amitav Ghosh’s Glass Palace, a fascinating tale of war, exploitation, love and family told over several generations in India, Malaysia, but focused on the heart of colonial darkness, the crossroads of Asia, Burma. It is, by far, the best writing encapsulating why colonialism was an unequivocal tragedy for the entire human race. It is part of the reason I am so fascinated by this country – and want to go there. When I was 23, I arrived, alone, to Thailand, Burma’s eastern neighbor, and spent six months traveling around Southeast Asia. I was idealistic then as I am now, but far less certain of how to channel that idealism. I wanted to change the world, but first, I needed to understand the world.

It was an emotional trip, begun just a month after my grandma died unexpectedly. As I entered Asia after a touching month volunteering in rural Nepal, I wanted to experience, to feel, in a region which, in many ways, represented the world.

Where else do you have one of the world richest countries (Singapore) right alongside one of the poorest (Cambodia)? Where else does French (Laos, Cambodia, Vietnam), British (Malaya, Burma), Dutch (Indonesia), Spanish (Philippines) and Portuguese (East Timor) colonialism brush shoulders with one of the few countries to never fall under foreign control (Thailand)?

And then there is Burma. This was the country that preserved Buddhism when it withered in India, which once defeated the vastly superior forces of the Qing Chinese, who sacked the Thai capital of Ayuttaya and built one of the greatest empires of human history in Bagan. It was once, just over a century ago, the wealthiest country in Asia. Today, it is one of the poorest in the world. Where else has the cruelty of modernity been so acutely felt, where else has repression taken on such a diverse form?

During that trip, I discovered my passion for history and culture, and after returning home, I was attracted to books about Burma; Emma Larkin’s Finding George Orwell in Burma, Thant Myint-U’s The River of Lost Footsteps, and, especially, Amitav Ghosh’s aforementioned classic.

If I wanted to change the world, Burma would be at the center of that struggle. It was akin to Tibet, another country I cannot go to until I feel I can do something positive, and refuse to go to until the Dalai Lama is allowed to return.

Until the Dalai Lama can return to a Free Tibet, I won’t go there.

Today, Burma is open and there is, finally, the possibility of making positive change there for the first time since the British boats rolled up the Irrawaddy in 1885. It’s struggle is my own, its future is that of all of us. Why Burma? It is, at once, a backwater paradise and the prototypical Orwellian state, the idealism and depravity of humanity. To me, the atrocity of exploitation is so clear here, in a country with such a long history, with a religious, tolerant past, manipulated by outsiders with no regard for its people or culture.

I don’t see Burma as a fantasyland, and its appeal isn’t that it is “untouched,” in many ways, it is more impacted by foreign forces than any place in the world. It’s it run by a military dictatorship, a decidedly western system, and ruled through totalitarian ideas developed in Germany, Russia, and the colonizing powers of Spain, the UK, and France. It’s not surprise that many believe Orwell’s classic 1984 was, infact, a prophecy about the Burma he served in for five years in his youth.

No, what appeals to me is the complexity. Did culture there get preserved because there wasn’t access to the outside world? Or was it formed in response to the situation there? So many things connect me to Burma – the religion, closely tied to my own beliefs, including the Vipassana retreat I did three years ago of which the founder was Burmese. Then there are Burma’s cultural connections between India, my cultural homeland, and Southeast Asia, where I’ve focused my professional career and written extensively about during the past few years.

I’ve decided that my destiny is there. I want to learn the language, explore the diverse cultures, and make a difference not for my own goals, but for the people there, and for people everywhere.

We seem to have a unique opportunity to, for once, right the wrongs of the past. It won’t be easy. But it is possible. Who could have said that back in 2008, when shots and repression ended one of the bravest, most noble protests movements in human history?

That is why I want to go to Burma. Now, years after its story first captured my mind and tore my heart, I want to do something to help us all heal together.

If this was an ideal world, I’d go to Mandalay by boat, sailing through the jungles of the Irrawaddy Valley, and see Burma enfold slowly, naturally. Our modern world, for all its freedom, no longer allows for those types of experience. What I hope to capture is something more powerful – the power of love and hope to build a new future.