The Borders Which Define Us 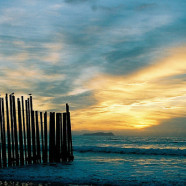 History affects us perpetually. More so than we hope, or believe.

San Diego is the southernmost city in the state of California. Below me is a border, drawn as a straight line cutting through the desert, until it meets another straight line in a slightly different angle. This is the arbitrary US border with Mexico, a consequence of a not so positive past.

It is the meeting spot of an English speaking and Spanish speaking country, two European languages that, strangely, don’t ever meet in Europe.

This border, which I’ve crossed just once, nevertheless has defined my life in so many ways. San Diego is my birthplace. English is my first language, and my passport allows me to travel freely around the world. Move my place of birth five miles south, and my language, freedom, and exposure to culture completely changes.

It was rare, during my travels, to come upon a border that was, well, worth visiting. Dirty, full of seedy shops and illicit cross border transit, they are often the despots of humanity.

San Diego, though, doesn’t feel at all like a border town. Los Angeles, to the north, feels far more Latino than San Diego, with its firmly Californian beach vibe. Looking into the mountains outside my parents suburban home, its easy to forget that just 20 minutes away is another country, where people speak a different language. Many San Diegans do just that, their mental geography filled with a black hole.

Los Angeles, San Francisco, Phoenix, they all feel closer than Tijuana, the Mexican border city, or Mexicali, a capital of a million people just an hours drive from San Diego.

The amazing thing is how arbitrary this all is. In a place where English and Spanish were never spoken as recently as four centuries ago, this border could easily have been a few hundred miles to the north, or to the south. San Diego could still be in Mexico. Tijuana could be in America. It’s a result of the history and the atrocities of European colonialism in the new world. There are indigenous people, like the Tohono O’odham, who are stuck between borders, Mexican and American and, at the same time, neither.

Perhaps I am the same. The US border, here, between San Diego and Tijuana, is a more powerful force than anything nature has ever build in this part of the world. The line on the map becomes more powerful than the actual space in reality. Our minds have lost their ability to understand context.

No wonder. The meaning that we give to a human construction such as a straight-line border really is a stark sign of how disconnected humanity has become from nature and the land.