Freedom from Assimilation: Learning from Einstein 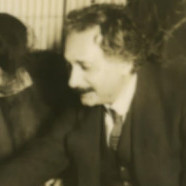 “The undignified mania of trying to adapt and assimilate, which happens among many of my social standing, has always been very repulsive to me.” Albert Einstein

Einstein – a celebrity among Asians – is the most famous scientist in modern history, who used his splendid mind to destroy preconceptions. Among his many contributions to science are the discovery of the photoelectric effect, proof the existence of the atom, and the development of the special and general theories of relativity in early 1900′s Germany. He was also Jewish, a minority in an increasingly intolerant society.

His strengths came not from an addiction to study, but from his anti-authoritarian, anti-hierarchy beliefs that grew from his ability to think outside the box. Though he never followed any religion, creed, or joined a political movement, he was avidly pacifist and anti-nationalist. He never gave up his identity, unlike many of his fellow Jews who, like Einstein, were from families who had lived in Germany for many generations, and felt completely German. They served in World War I, converted to Christianity, changed their names to sound more Aryan, and consumed pork and beer like any proud Prussian.

Einstein was smarter than that. He saw that any society that pressures people, even covertly, to assimilate to fit the national identity, lacks genuine openness and tolerance. As Adolf Hitler came to power in 1933, Einstein left Germany, whereas many of his Jewish peers stayed, certain that the Germany they knew and loved would never persecute its most prosperous, proud minority.

This piece is the third in a series of articles on Asian culture and identity – starting with my experiences growing in America. Originally appeared in 8Asians. English: receiving from Judge his certificate of American citizenship

Assimilation is the creed of modern America. It is the ingredients that go into our so-called melting pot.

Is it the choices our parents or grandparents made to educate us many of us in English, to not teach us to write or read our native languages, so that we could thrive in American society.

It is our acceptance of an economic system in which we are judged by how much we make, not how we make it, and only allows a narrow set of behaviors in identifying success.

For many of us, these choices were made before we were born, and were often done in constraining situations. To immigrate to a new country is incredibly tough. I don’t blame those who came before us, but find that a society that forces assimilation as the sole path toward prosperity is one that, like pre-war Germany, isn’t nearly as open as it seems.

When I was in Thailand this past winter, I was invited to a wedding of a friend, where I sat at the only table with English speakers. It was a colorful ceremony, with eight courses of amazing Chinese-Thai cuisine. Next to me was a fellow American from Oklahoma who’d been living in Thailand for nearly four years and was fluent in Thai. It is incredibly rare to meet a Westerner who took the time and effort to learn an Asian language, so I was impressed, and wanted to understand his motivation.

“Why did you decide to come to Thailand? Why here in particular?”

Like magic his subtle Asian features – a slightly narrower nose, long eyelashes, dark straight hair – became glaringly apparent. But the story wasn’t so simple. As I found out, his mom had never taught him Thai or raised him Buddhist. Emigrating from Thailand before he was born, she gave up her culture to try and assimilate in a difficult situation. He grew up completely American, and only in college did he begin to wonder why he knew so little about his other identity, and, thus, came to Thailand, alone.

This is how assimilation benefits American society, but doesn’t necessarily benefit us. We lose a piece of ourselves when we give up our culture, language, or beliefs. We lose our connection to our heritage country, to the long line of cultures and traditions passed from generation to generation.

Jews in Germany rarely spoke Yiddish or Hebrew, and were mostly non-religious. To the south, the situation in Bulgaria was completely different. There, Jews spoke Ladano (a Semitic-Romance dialect dating from Moorish Spain), and practiced Judaism freely, while at the same time, feeling connected to cosmopolitan Bulgarian society. When Bulgaria fell into nominal Nazi control, orders were made to deport all of the country’s 50,000 Jews. Unlike what happened in Germany, here, there was an uprising. Bulgarians of all creeds rose to protect their Jewish brethren, despite their different language and religion. Priests from Bulgaria’s Orthodox Church stood with Rabbis in the city’s synagogues. In the end, Bulgaria was the only country in Nazi-controlled Europe to maintain and protect a large Jewish population.

The problem is that identity is hard to define. What makes you German? What makes one American? More often than not, identity becomes defined negatively – by what it is not. Being German is easier to define as not French or, especially, not Slavic. An American is not a FOB, and necessitates discarding, as quickly as possible, those behavioral elements that tie you to your place of birth. Asia, as more “foreign” than mainstream western culture, becomes “less” American. Assimilation, thus, forces one in a certain direction, as American is better than Foreign, or, “American” is NOT “foreign.”

Bulgaria didn’t have a strong national identity and thus protected its minorities better (aided by several quirks of history). I’ve been to Bulgaria, and it is a warm, welcoming place, the first country in Eastern Europe where people looked beyond my skin color and didn’t judge based on where I was from.

America today isn’t Germany in the 1920′s, but it also isn’t Bulgaria in the 1930′s. We’re in the middle, stuck between debates about making English the national language and comprehensive immigration reform. We’re accepting, but we could also do a whole lot better.

The answer is us,  in how we define ourselves and our identities, beyond the narrow mold of assimilation. Bulgarian Jews maintained Ladano for several generations – how many third Generation Asian-Americans can speak their Grandparents mother tongue? Is that Freedom?

Had Einstein assimilated into rigid German society, it’s certain his brilliance would have been squashed. Thankfully, he maintained the tradition of Jewish intellectual freedom and never sacrificed his values to get a job (dooming him, for years, into patent office obscurity). He clearly saw the folly of assimilation. If we want our children to be like Einstein, then we should look at his moral character too, because it is this, more so than his scientific theories, that made him the iconic figure he is today.