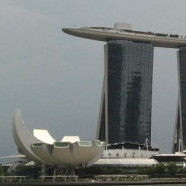 In most countries, a man getting killed by a bus would be a tragedy, but quickly forgotten after a few days. In Singapore, this exact event resulted in a riot in Singapore’s vibrant, crowded Little India neighborhood, where low-wage South Asian migrant workers gather on Sundays, usually their only day off, to drink and socialize. The riot, first such one in 40 years, shocked the nation and is bringing to the surface thorny issues of migration, assimilation, and social cohesion. Issues which the city-state has been able to, for the most part, avoid.

However, blaming migrants, the Government, or even Singaporeans is missing the point. The reality is that the discontent’s source may come from the other end of the spectrum, far from Little India: high paid, expats who are driving up living costs in this small, island nation of five million and counting.

No one ever calls the legions of foreign workers from developed countries in Europe, North America, and East Asia migrants. They are “expats” who form the elite echelon of Singaporean society. They earn the highest wages, live in the most exclusive Central Business District (CBD) high-rises, and dominate the middle and high management positions in Singapore.

It makes sense. As a small country that aspired to become a regional business hub, Singapore knew that it lacked the manpower to develop a diverse economy. The solution – incentive companies to setup headquarters in the region’s most stable, safe country, and allow them to bring in their own staff to fill the roles that Singaporeans could not. And come they did, bringing expats who received generous pay packages that, event today, remain far above the average income of a Singaporean. A survey from HSBC found that 54% of expats in Singapore make more than $200,000 a year. Many work for foreign companies but, increasingly, even Singaporean companies are hiring expats – and paying them premium wages.

On many levels, it worked – Singapore was an Asian Tiger, rapidly growing through the 80’s and 90’s, and, to the surprise of many, maintaining high growth throughout the past decade as well. No developed economy in the world has performed as well as Singapore since the turn of the century.

Asia’s emergence as a global engine of growth as only solidified Singapore’s position as a financial center. As business increased and the expat population grew, it quickly became necessary to import migrant workers to build the rail lines, the high-rises, and work in the service industry. The 2000’s transformed Singapore. According to the World Bank, from 2000 to 2010, population grew by over 1 million, from 4.02 to 5.31 million, far eclipsing the previous decade.

For much of Singapore’s history, though, expat salaries and migrant laborers were an annoyance, but, most Singaporeans were benefiting from the city-state’s rapid growth too. Government policies succeeded in keeping costs down. Today, however, with the last decade’s unprecedented population and economic book, apartments, food, and goods are expensive, and salaries for Singaporeans haven’t kept up.

The average rent for a 120 m2 apartment is over $4000 USD, and for those purchasing property, down-payments of 40% aren’t uncommon, as property prices surged 50% from 2007-2012, mostly due to foreign purchasers. In little more than a decade, an affordable city has rapidly transformed into a costly one. According to the Economist, Singapore is the sixth most expensive city in the world, above New York, Paris, and Zurich. In 2001? It ranked #97. That is Singapore’s latest economic miracle.

In light of the riots, some Singaporeans lament that low-wage migrants are unappreciative of the opportunities that Singapore is giving them, but they also disdain the growing legions of expats. Many feel that they are 2nd class citizens, below, in salaries, status, and access to jobs, to mostly white expats from abroad.

So what now? At a glance, it may seem that Singapore is unsure of what direction to go. On on side, companies are being encouraged to hire more locals instead of expats. On the other hand, the Government wants to increase the islands population by 30% by 2030 to maintain economic growth and, by association, the ruling People’s Action Party’s hold on power. With birthrates among the lowest in the world, there’s only one way to do this.

Perhaps the true answer lies in the surprising statements made by Singapore’s Acting Manpower Minister Tan Chuan-Jin. Instead of demonizing South Asian migrants in lieu of the riot, he stated that there would be no clampdown on migration. It was a refreshingly honest acknowledgment that the vast majority of South Asians were peaceful and would never resort to violence, and, tactfully, an acceptance that the policy of migration and growth is here to stay.

Thus, the future will be more migration. More expats. Higher living costs, and, seemingly, an even more diminished role for Singaporeans in their own country. Will migrants, expats, and locals together accept more of the same?