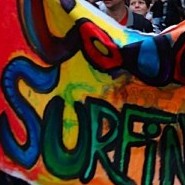 Last October, news broke that Couchsurfing CEO Tony Espinosa suddenly stepped down, the latest in a long line of setbacks for the newly private company. In this article, originally published in Bootsnall, I explore how an idea with so much promise lost its foundation – its member-build base – leading to its present day downfall.

When I logged onto Couchsurfing a few months ago in San Francisco, California, and put my couch status as “available,” I expected to be bombarded. That was how it was four years ago, when there were only a fraction of the members on the site. Now, with 7 million members, and, me, hosting in one of the most popular travel destinations in the world? I braced myself.

Days passed. Then a week. Not a single request, Despite 183 positive references and 42 vouches, no one wanted to surf with me. My long-time Couchsurfing friends in the city told me it was the same for them. Sparse requests, and those that came, poorly-written, often from empty profiles. Guests who never showed up, messages that were never responded too.

The site had changed.

I knew the situation was bad. The heart of Couchsurfing – hosting and surfing – was disappearing, the very same city where the site itself has its Corporate headquarters. But once management put the values of venture capital funders over the organic, self-organized traveler base, and reorganized with a top-down, “start-up” mentality, it was, to me inevitable. An Idea that Could Change the World

What Couchsurfing did was utilize the power of the internet to enable and expand the natural human spirit of openness. It allowed people with similar worldviews to connect over vast distances. Knocking on a stranger’s door turned into sending a couch request. Seeking friendly locals on the streets turned into travelers coming to weekly potlucks or cafe gatherings. The positivity was incredible – in the first few years as a Couchsurfer, I never heard a single negative experience.

Couchsurfing was Globalization done right; sharing culture, ideas, with no or little financial transaction. Uniting over commonalities across cultures, that, itself, could change the world. That’s why I organized my first event, in 2008, as a potluck in a San Francisco park – so that everyone could attend. That was why, then, I accepted every single request, regardless of profile, gender, or age. Because it was the right thing to do, true globalism.

We built Couchsurfing, not management, who, in those days, did little more than provide a basic, buggy, but functional website. We, who believed in the idea, the Couchsurfing spirit of sharing, setup local groups, potlucks, events, and told our friends about this new, radical, powerful social network. It wasn’t perfect; Couchsurfing had its turf battles, conflicts, and, too often, an elitism exhibited by long-time members, but despite that, it was revolutionizing travel. The sky seemed the limit.

After my yearlong trip around the world – during which the discovery of Couchsurfing, as a host and surfer in Spain, Germany, Hungary, Turkey, Malaysia, Thailand, and Japan, made my trip what it was, I donated $50 to the site to become a verified member, hoping to donate more once I had a steady income.

Five months later, Couchsurfing announced that it was opening a “basecamp” in the Bay Area, a place for volunteers to gather to help develop the site. The local community buzzed – this was a city was some of the brightest people in both technology and non-profit management. There was so much potential to work and build a stronger, better Couchsurfing that could, finally, meet its true potential.

That hope quickly faded, as basecamp became a metaphor for the disconnect between management and members. Tucked away in a house in posh Berkeley, basecamp showed little interest in either the local community, or San Francisco’s vast knowledge network. Techie friends of mine tried to contact basecamp, eager to help fix some glaring holes in code or database structure, but were rebuffed. Basecamp members turned out to be Casey Fenton’s, Couchsurfing founder, inner clique, unaccountable, and, even more amazingly, invisible. They almost never came to San Francisco events, rarely had the community over, and gave little inkling of what was happening inside. Even more shocking – they were getting free rent, a generous per-diem, and even had an in-house chef with a generous budget. My donation was going to fund their vacations in comfortable California digs.

This lack of transparency, sadly, continues to this day. I never donated to Couchsurfing again. Stealing Couchsurfing from its Members

Couchsurfing announced in 2012 they had failed to receive non-profit charity status and were going to reorganize as a B Corporation. In fact, they already had $7.6 million in funding from venture capitalists, and without any consultation with members, a new CEO, Espinoza, had been hired.

It was a coup. The site we had built and organized was suddenly under the control of a CEO who had never before used Couchsurfing and investors who were interested more in the site’s monetary potential than its power to break barriers between cultures.

Immediately, with money flowing in, member input became irrelevant. The wiki was removed, group pages were transformed, statistics about the site became “private information,” and the Ambassador program was revamped. Couchsurfing was now a start-up. Millions of new members created empty profiles, while thousands of older ones stopped logging in at all. As a “service,” CS even experimented charging customers. The problem was that WE, the members, were what management was trying to sell, the connections, networks, and communities we had built. They couldn’t profit off of our work because money was rarely a motivation. Not surprisingly, Couchsurfing Inc failed to monetize the site, leading to Espinoza’s resignation and the uncertainty the site finds itself in today.

The Future of a Nine-year old “Start-Up”

That CS was having problems was no secret. My article on the Rise and Fall of Couchsurfing struck a cord – getting nearly 7,000 Facebook likes and hundreds of comments. Couchsurfing inc. responded as a Corporation would – with boilerplate PR talking points, copied and pasted to forums all around the web. One staffer, however, sent me a personal message, expressing surprise at my opinions and wondering if we would talk more about my concerns. Was this Couchsurfing finally listening? Was there hope?

We met at a cafe, and, for nearly 45 minutes, I was subject to being talked at about all the great things going on at CSHQ, why my article was wrong, and how all the Couchsurfers she knew (later I saw her profile only had 14 references, almost all from fellow staffers) were happy about the changes. It wasn’t a meeting to understand the frustrations and anger of members, but to convince me that HQ was right, and that we should trust in their opaque vision.

Like my articles, anything I said would not be taken seriously. Members, like me, would have been willing to donate to the site if they could show, with full transparency, how money was being spent, and allow for greater participation in development. Instead, they rebuffed our attempts to help, ignored our concerns, and kept spending money in secret.

Couchsurfing made a deal with the devil – venture capital money – and lost its base. It’s a lesson to any social network that aims to connect people in meaningful ways. Empower your members. Be transparent and collaborative. As my experience in non-profit social activism has shown me, people want to be part of something big, to have ownership. Couchsurfing was built on that collaboration, and once that was taken away, everything we had built came crumbling down.