How History Repeats Itself: Hiroshima and American Rhetoric 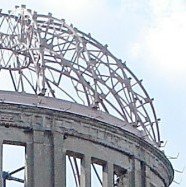 69 years. Have we learned from the past? I wondered that when, recently, I had an enlightening conversation with an elderly American social worker in Kansas City, my hometown. Talking about traveling in Asia turned into a discussion on the Pacific theater of World War II. And the bomb.

“It’s terrible we had to do it, but, we had no choice,” she told me “Japanese culture is just like that. They would never give up otherwise. That is how they are.”

Kamikazes, imperial spirit, a “love of their homeland” for which they would fight, inch-by-inch, the rhetoric has been flowing non-stop for decades. It was embodied in the racially driven propaganda of the 1940’s, the same propaganda that led to Japanese Internment Camps.

We had to kill 120,000 innocent civilians, mostly women and children. We had no choice. Because they were Japanese.

“You’re too young. You wouldn’t understand,” she said, a look of pity on her face. 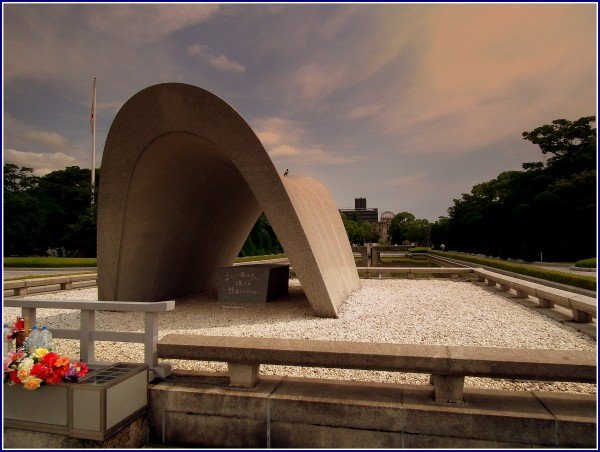 Would I not? A year earlier, I saw the other side, and found a refreshingly humane people who have not only discovered the power of forgiveness, but also compassion.

I was in Hiroshima as a fellow for US Future Leaders Travel Program, run by the Japan Foundation, a week of cultural exchange focused on building ties around commonalities, not propaganda or rhetoric. Understanding America’s history in Japan was a key step, so we made our first stop at the Hiroshima Peace Park, built right below the spot where the bomb exploded. At its center, the iconic dome building, its hallowed shell a ghostly memorial to the power the world felt that sunny, August day, when everything changed.

Our Japanese guide, Kazumi, led us into a small room in the adjacent Hiroshima National Peace Memorial Hall. A few minutes later, a surprisingly swift, 85 year old woman with thining white hair, walked in with two translators, and, to a silent audience of Americans, told us her story, aided by paintings based on her memories that she held up, vividly showing us what happened.

In 1945, she was just a teenager, one who knew there was a war going on, but besides the absence of men in her small city, she didn’t really have an opinion about. Her view of reality was shaped by Japanese propaganda, but not by some innate cultural “spirit.” She certainly wasn’t going to give up her life for Japan’s honor.

After a short school day, all the women from her school went to a factory, where they sewed uniforms for the military. It was here when she saw a bright flash. Then, a loud noise, darkness. Rubble, a few moans, but, most terrifyingly, silence.

She was able to escape, with only light injuries, but most of the girls in her factory were dead. As she walked outside, she saw red, burned people, their skin melting, their faces hallow, their gender indiscernible. They begged her for water. She saw some collapse onto the ground, dead. The formally blue sky was now an apocalyptic red, and she could see fires burning on the hills around the city – the cupped valley having been specifically chosen because it would maximize impact. Black rain began to fall as she found her way to a shelter. She had no idea where to go – the city was devastated, completely unrecognizable – home could be anywhere.

Miraculously, her father has survived, and hoping she was alive too, walked all around Hiroshima looking for her. Two days later, when they found each other, they had a tearful reunion. It seemed like a miracle.

Then, suddenly, a few months later, he was dead. Cancer, caused by all the radiation he absorbed from wandering outdoors. Side effects that the America military knew about, but never bothered to even attempt to inform the Japanese even after they surrendered. Thousands more would die from this willful negligence, the effects of which are still being felt today.

Even she wasn’t spared, and twice has had cancerous tumors removed, luckily, both caught early. Japan has provided extensive, free healthcare to all bomb victims, one reason that so many are still alive today, though that number drops every day. Hiroshima has been rebuilt, but the memories of tragedy are strong. That is why, she told us, even at 85, she comes and speaks to visitors like us, talks about memories and images that would traumatize any of us. Because soon, survivors like her will be gone. Then, its up to us to make sure that no other city in the world goes through what Hiroshima went through in 1945. We must continue telling her story. 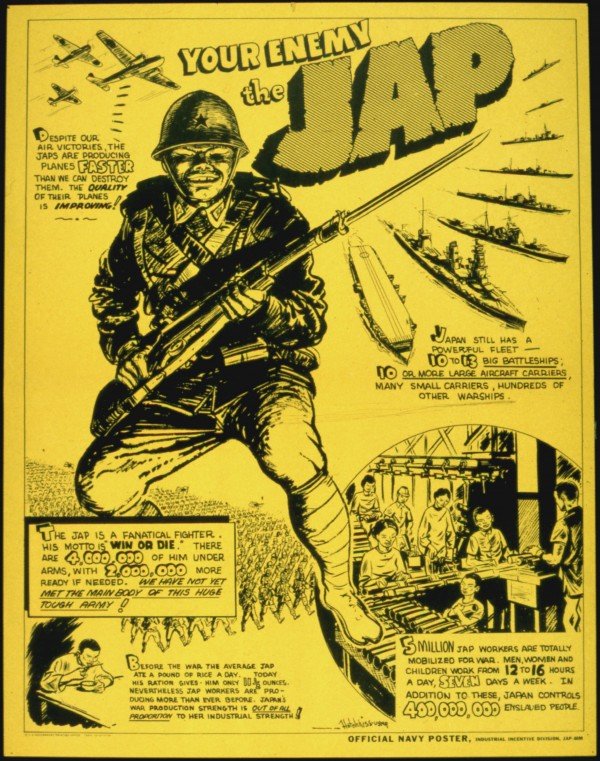 Rhetoric leads to action. Words have power. Japanese internment camps were setup because “Asian blood is strong” while nothing similar was done for German-Americans or German speakers (President Franklin Roosevelt, of course, spoke German himself). A military invasion of Germany was horrendous, and the firebombing of Dresden (led by British, not American air forces) was horrific, but the scale of what happened in Japan far ellipses anything in Europe. The intentional firebombing of dense, wooden Japanese cities created hundreds of Dresdens, few of which got any media attention. One attack, the burning and destruction of historic Tokyo, killed more people than in any other event in World War II, an estimated 140,000 people, nearly all civilians.

More than the two whose anniversary we commemorate this week, the events which changed the world. Soviet Russia, of course, was watching, and the bomb would be the first halo of another, more psychological, but just as destructive, war.

The decision was made in, what former Defense Secretary Robert McNamara called the “fog of war,” a fog in which there are no winners. Only losers.

Have things changed? There have been no Atomic attacks since Nagasaki, but countless wars in places like Indonesia, the Congo, Korea, Iraq, and, today, Syria and Gaza, have made the preceding decades just as deadly as the 1940’s.

Here in the United States, Asian-Americans may be more integrated into mainstream society than Japanese-Americans in the 1940’s, but we are still subject to harmful stereotypes, and we also have plenty of generalizing rhetoric about Asian nations and their culture. Japan is now our ally (and their culture is now “industrious” and “hard-working”), but the new enemy and source of fear and anger is China. And the rhetoric scarily similar.

Take a look at these quotes and see if you can tell which ones are from the 1940’s, and which are from the past decade.

“Author was strongly opposed to [country] migration to America because it might lead to [country dominance. He argued that, as [country] grew, its prestige would rise and intermarriage might occur. This was seen, argues the author, as snuffing out “the individualism that had made us great.”

“[Country] study like robots and can’t think for themselves. They are very hard working people.”

“Pulsing with…martial energy, and boasting a peasantry that, unlike others in history, is overwhelmingly literate, [blank] constitutes the principal threat to America.”

“Your [blank] are different. They go into the parts of the city that they like…and buy. They will pay any price that the owner demands, perhaps up to five times its value. The instant the sale is announced the value of the other property in that block begins to decline. They will probably pick up an adjoining house or two at about its assessed value. After that [country] can have the remainder of the block at their own price.”

Even if Chinese-Americans are in better situation today than Japanese-Americans in the 1940’s, are we sure that heightened tensions wouldn’t change that? Tensions are rising in the South China Sea. Many of China’s neighbors believe that a regional war is inevitable. There have already been a few spy cases involving Chinese nationals in the United States. Imagine what happens after China overtakes the United States as the world largest economic power in 2018, and its military begins to threaten US bases in Asia. It might not take much for the entire house of cards to fall.

I believe it was our belief in Japan’s “alien” culture allowed us to drop a bomb that killed over a 100,000 civilians, without any warming, as our militarism required us to destroy them first. After all, it was only Japanese lives who perished in the attack. And what if the surrender terms eventually agreed to were identical to ones that Japan accepted, in principal, before Hiroshima and Nagasaki? It wasn’t the point. We had to do it. If we keep telling ourselves that, perhaps it will become true, because, history is written by the winners. Us.

When the Dalai Lama visited Auschwitz, the horrific Nazi death camp in Poland where tens of thousands perished, his first reaction was to feel pity for the victims, but, then, to feel even more pity for the perpetrators of the crime. Because it is they who truly suffered in their souls, and it was they who had to live with the conscience of what they had done for the rest of their lives.

Hiroshima has suffered, but its people are working to build a better, peaceful world, where no one goes through what they did. Every year, on the anniversary of the bombing, a giant peace festival is held, with hundreds of thousands attending from around the world. In the middle of the Atomic Bomb Museum, which, to my surprise, has a section on the atrocities committed by Japanese troops during World War II, are the many letters sent by Hiroshima’s mayors to any country in the world that conducted Nuclear testing. Instead of calling for Americans to be tried for war crimes, the city has called for the abolition of all Nuclear weapons globally.

America, unfortunately, hasn’t yet been able to come to terms with the decisions of our past. We still cling to the belief that “we had to do it.” There’s a lot we could learn from Hiroshima’s far more humane response to suffering and move beyond the false idea that the bomb saved American lives. We claim we had no choice, but we did, as did the victims of Hiroshima. If we let rhetoric make decisions for us, I fear history might just repeat itself somewhere else. If Japanese culture would not allow them to quite in 1945, what is it about American culture that does not allow us to admit we made a mistake 69 years later?

Oh, those quotes above? All, except the last one, are recent, and about China.